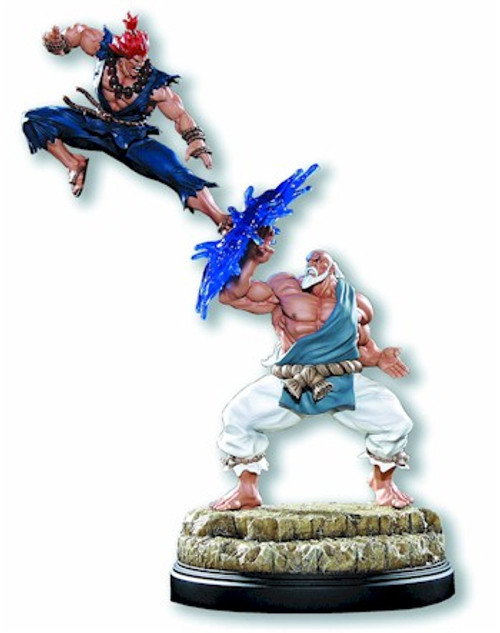 Gouken is originally the training partner of his younger brother, Akuma, under the tutelage of their master, Goutetsu. Both Gouken and Akuma are trained to utilize lethal techniques including Hadouken, the Shoryuken and the Tatsumaki Senpukyaku, however after Akuma uses these techniques to kill Goutetsu, Gouken modifies them to eliminate their lethality and creates a new system which he teaches to his young students Ken and Ryu. Though it is originally believed that Gouken is killed by Akuma, the former survives the latter's Shun Goku Satsu technique by succumbing to a protracted catatonic state. He later reveals his perpetuity to Ryu, intervening when Ryu begins to exhibit the corrupting darkness commonly associated with Akuma.

Akuma is the dark master of Shun Goku Satsu, a technique that physically threatens both the practitioner and the target. He kills his master and seemingly kills his brother, Gouken, the teacher of both Ken and Ryu. Ken immediately confronts Akuma to avenge Gouken, but Ken is no match for Akuma's power. Ryu arrives later, pursing Akuma both because of personal grief and because he (Ryu) begins to have Akuma's dark nature locked within himself. Akuma has pushed himself beyond all human limitations in his quest for ultimate power, and he often wanders idly, fighting only worthy opponents in his perpetual search for a genuine rival warrior.