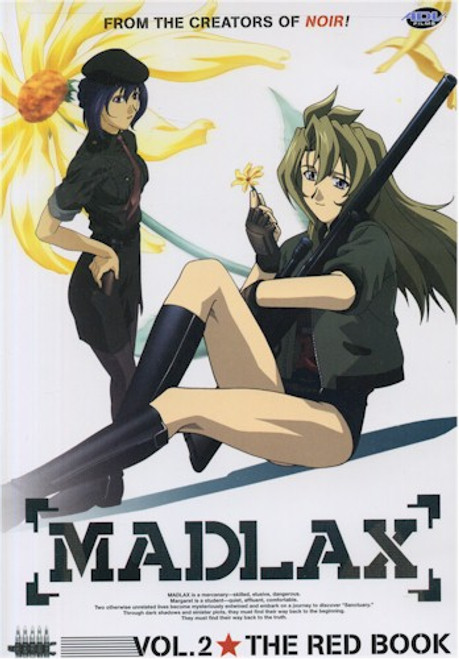 From the minds behind Noir, a compelling saga of lives and the dark circumstances surrounding their mysterious connection. Madlax - An assassin, head and heels above the rest. She is a deadly poison, yet irresistible to the tongue. Nothing can surpass her skill in the art of combat - except perhaps her skill in the art of deception. She will find you, she will charm you, and then she will most certainly harm you. It doesn't matter who you are. It doesn't matter where you are. It doesn't even matter if you know she's coming. Because in the end, strong or wise, rich or hardened, friend or foe, Madlax will have you eating bullets out of the palm of her hand. Margaret Burton - An orphaned schoolgirl with issues far greater than mere homework. Haunted by bizarre and cloudy dreams, she must not only endure the horrifying images of her past, but she must also traverse the treacherous path of high school. Margaret is lost - lost in her way, lost in herself, lost instead of alive. Grasping for the truth, she flutters in and out of reality without ever letting her feet touch the ground. Her connection to Madlax is mysterious. It's dark, it's deadly, and of course, it's classified.

Made in Heaven Graphic Novel 02 Juri

Made in Heaven Graphic Novel 01 Kazemichi