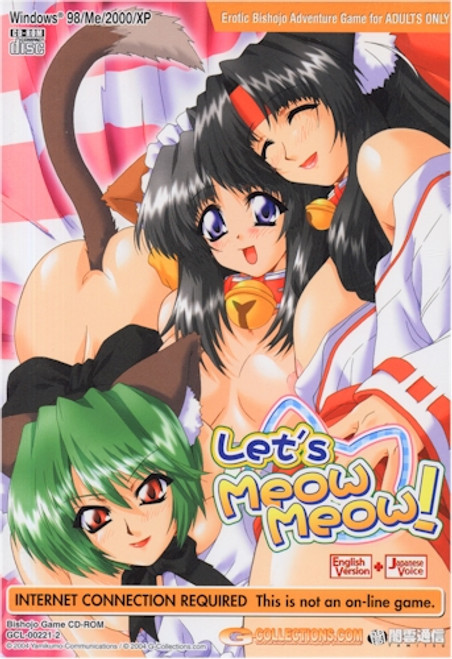 A great new interactive dating-sim game from G-Collections, this is the furry and wonderful world of Let's Meow Meow!

Our hero is a young man named Ibuki, a real cat lover who can't resist scratching a puss on the head. One night, he had a vision of the Cat God, who told him that he wanted to grant Ibuki any wish as a reward for being kind to his feline friends. Ibuki wasted no time in his reply: "I want a cat girl!" he said -- a girl with cat ears and a cat's tail.

Several days later, Ibuki heard a meowing sound coming from a cardboard box left outside his door. He opened the box but was shocked to see a beautiful naked cat girl curled up inside, purring. "I've come to serve you," she said, "because you've shown kindness to cats." The next thing he knows, his apartment is filled to the brim with gorgeous cat girls, all eager to do whatever they can for him. You're the luckiest guy in the world!

Let's Meow Meow! is a multi-scenario love-sim game for Windows. You play the interactive game by moving through the story and making choices that affect the outcome, allowing for many different potential endings and excellent replay value. The game features the original Japanese voices along with an accurate English translation. This game is 100% uncensored. Features many popular themes and fetishes, including a "dick girl" path!

This game utilizes a new online registration system called VirtualMate, which requires an Internet connection. In order to play the game, you'll need to register via the Internet, which takes just a few clicks. Access the VirtualMate website and create a password by entering your product key, and you're ready to play.

including a "dick girl" path!

Neko Atsume: Kitty Collector - Where Am I Meow?