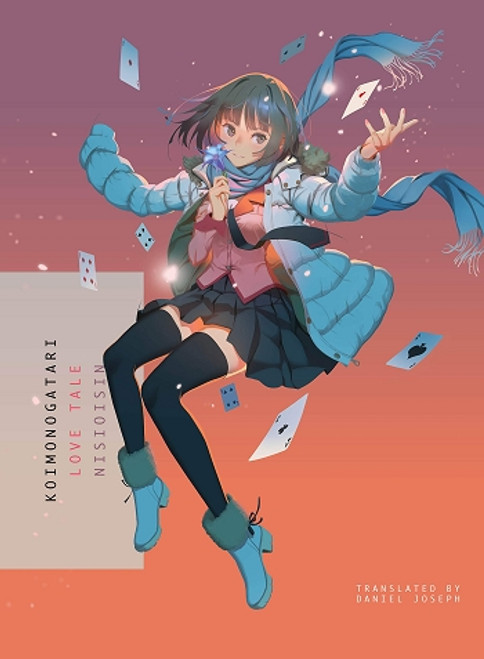 Circling back to a middle school girl's apotheosis, if we can call it that, in Otorimonogatari, and the mortal threat it poses to the hero and his girl, this ⌠Season Two÷ finale is narrated, for the first time in the series, by a grown-up--but if the word conjures a sense of reliability, of stability and certainty to you, dear reader, then the lesson to take home from this is to trust no one.

Because the teller of the tale, who has been summoned by the heroine to defuse the situation, despite having been her nemesis since the very outset of the series, is--in the absence of the equally shady adult, Oshino, who at least was an expert--none other than his college frenemy, the fake ghostbuster who doesn't believe in ghosts, the shameless swindler Deishu Kaiki.

And it is indeed a con that he agrees to perpetrate, uncharacteristically pro bono, on a wrathful god--a mythic undertaking if true, which it may be, when a liar among liars holds that his story, like any other, is all a lie. But maybe not, when a man who claims to be wise in the ways of the world sounds just as self-conscious as his adolescent counterparts or a Russian anti-hero.