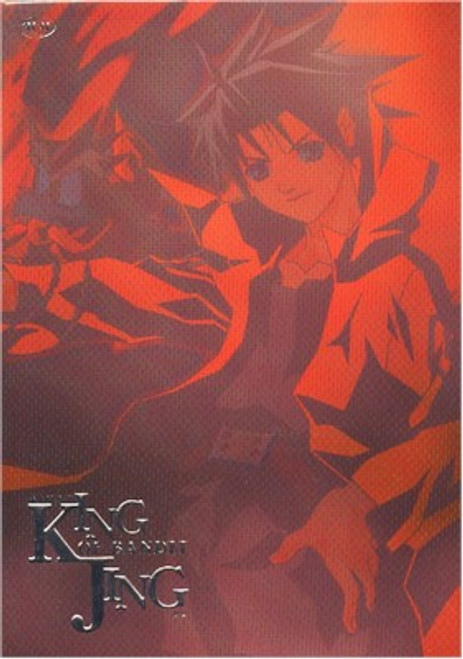 Vol. 01 DVD & a custom series art box, sized to hold the entire series. King of Bandit Jing. Directed by Hiroshi Watanabe (Orphen, Kiki's Delivery Service) King of Bandit Jing is based upon a manga of the same title by Yuchi Kumakura, detailing the adventures of Jing, a youthful and charming Robin Hood-esque bandit who travels from town to town, stealing valuables and hearts in equal measure. Along for the ride is his randy wiseacre albatross companion, Kir, who's constantly getting the pair into difficulties. Hide your coin pouches! No priceless bauble or exquisite jewel is safe from the leering eyes and stealthy hands of Jing, the King of Bandits. With a heart of gold and a wisecracking, girl-crazy bird sidekick, Jing steals his way through one exciting adventure after another! "The Capital of Thieves" We meet our intrepid heroes in the notorious Capital of Thieves, home of the fabled Double Mermaids, a treasure under guard by the city's evil mayor! Jing will do anything to retrieve the prize, but this jewel isn't quite what everyone expects! "The Ghost Ship of Blue Hawaii" Jing and Kir arrive in Blue Hawaii, a harbor town terrorized by a ghost ship. With the help of a local cop named Rose, whose father has fallen prey to the spell, Jing and Kir infiltrate the ship and expose it for what it really is in this parable of human greed. "The Adonis Capital of Time" (Parts 1 & 2) Join Jing and Kir on a quest to steal the grapes of time! Or will they get embroiled in a plot to liberate the people from the tyranny of the wicked Master Gear? Can they restore peace in a town cursed by the Demon of Time or will the clock run out for them all?