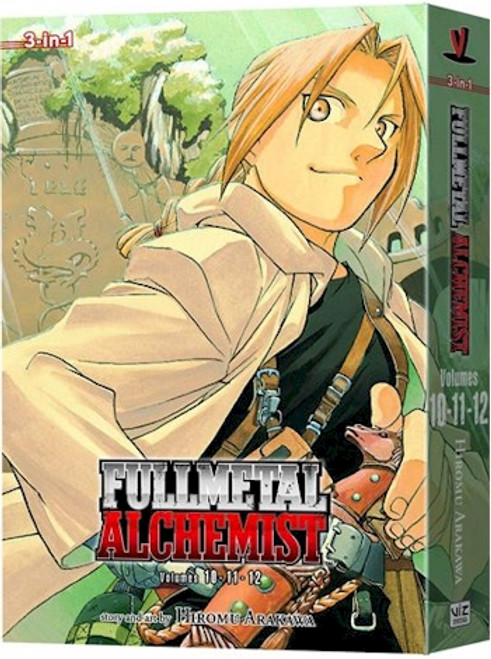 Bargain omnibus editions of one of the bestselling manga series of all time!

In an alchemical ritual gone wrong, Edward Elric lost his arm and his leg, and his brother Alphonse became nothing but a soul in a suit of armor. Equipped with mechanical "auto-mail" limbs, Edward becomes a state alchemist, seeking the one thing that can restore his and his brother's bodies...the legendary Philosopher's Stone.

Contains volumes 10, 11 and 12 of Fullmetal Alchemist!

Ed returns to Resembool and meets his estranged father Hohenheim for the first time in many years. Though their meeting is brief and strained, Ed comes away with the revelation that Al's body is still alive somewhere. But before the newly energized brothers can search for it, Scar returns, catalyzing an unlikely alliance between the Elric brothers, Prince Lin of Xing, and Colonel Mustang. Though they hope to use Scar to lure in a homunculus, the hunters become the hunted when Gluttony proves more than they can handle.