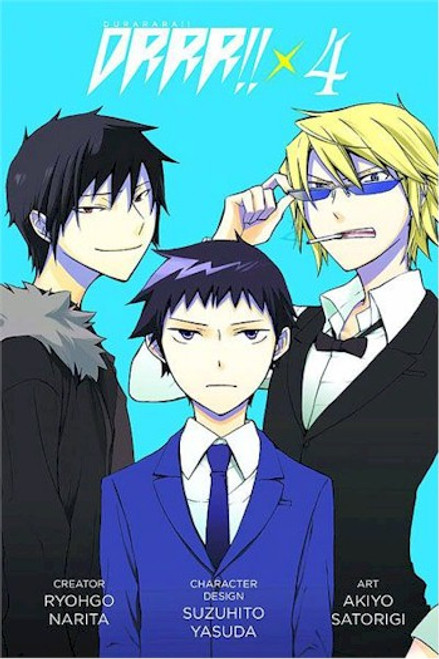 At the invitation of an old school friend, introverted high school student Mikado Ryuugamine, yearning for a life less ordinary, makes his way to Tokyo. His destination: Ikebukuro, a hotbed of madmen living out their most unusual lives. On his first day there, Mikado encounters a cast of characters so colorful, the rich hues of his rural hometown pale in comparison! As if the na?ve stalker chick, the high school senior obsessed with the rather creepy object of his affections, the hikikomori genius doctor, the hedonistic information dealer, the strongest man in all of Ikebukuro weren't enough...Mikado also chances upon a sight that leaves him rubbing his eyes and scratching his head - the Black Biker, who from bodysuit to license plate is black as night, soundlessly weaving through the streets like a figure out of an urban legend. Who is this "Headless Rider" on the jet-black metal and rubber steed!? And why does it seem like Mikado's already gotten himself neck- deep into the insanity that's the norm in his new home!?

When Yagiri Pharmaceuticals crosses the line, the true leader of the Dollars steps forward to take command of the vast network of members at his disposal. Though this unobtrusive boy holds a disturbing degree of power in the palm of his hands, Celty is preoccupied by the powers that still control her head. At the end of the day, will her twenty-year search all be for naught? Or has she found something even more precious along the way?