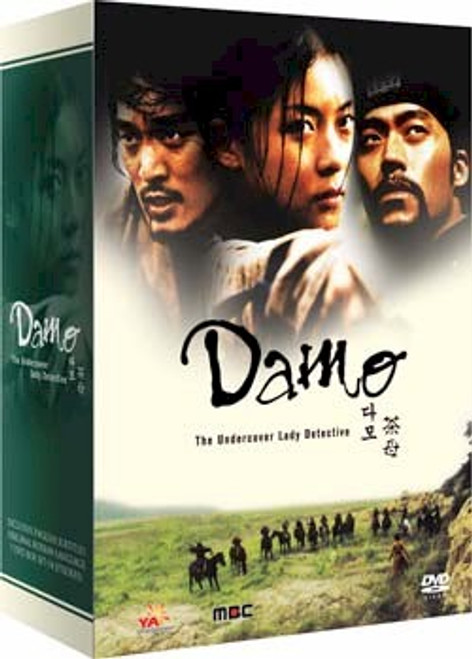 A Korean drama on an unprecedented scale, Damo tells a tale of love, conspiracy, loyalty, and honor. Taking place in Korea during the 17th century, the story focuses on the destinies of three central characters. Damo sets a new standard with dazzling special effects, breathtaking cinematography, and mystical martial art scenes. A case of counterfeiting money troubles the Police Bureau of Hansung, the old capital city of Korea. Jang Chae-Ohk (Ha Ji-Won), a young lady police detective, is sent by Commander Hwangbo Yoon (Lee Seo-Jin) to investigate the case. However, what appears to be a small case of counterfeiting turns out to be a much larger national conspiracy. Soon, Chae-Ohk finds herself faced with an insurrection lead by the very charismatic, Jang Sung-Baek (Kim Min-Joon). A man of the law, Commander Hwangbo Yoon is set on clearing the government of corruption. A man of the people, Jang Sung-Baek focuses only on tearing down social hierarchy and creating a world of equality. Amid a whirlwind of evil much larger than anyone could have imagined, Chae-Ohk must fulfill her destiny and become the legendary lady detective - Damo! Each Limited Edition Damo box set comes with a Reference Guide providing episode-by-episode reference information about relevant aspects of Korean culture and significant story background elements to help viewers thoroughly understand the storyline and action. The Reference Guide also contains introductions for all 17 lead characters in Damo.